MHT plans to restore four small ponds on Castlemorton Common which have become infested with crassula helmsii, a non-native plant which is smothering the native species.  Under licence from Natural England, the ponds will be covered by black polythene to exclude the light and kill the plant.  Whilst this work is carried out the ponds will need to be fenced to exclude livestock and the public.  The expected duration of the works is between 1 and 2 years.

Maps of the infected ponds and fencing locations can be found here.  Further information about the project can be found below.

Any written representations must be received by 9am on 23 December 2019.  Please write to info@malvernhills.org.uk or Mr A Pearce, Malvern Hills Trust, Manor House, Grange Road, Malvern WR14 3EY

Why is this being done?

Crassular helmsii is a non-native invasive plant species, also known as New Zealand Pygmyweed.  It can grow into dense mats which smother native pond flora and fauna.  It is such a concern that this species is listed under Schedule 9 of the Wildlife and Countryside Act 1981 and as such it is an offence to plant or otherwise cause this species to grow in the wild.

On Castlemorton Common, New Zealand pygmyweed has been recorded in four ponds and action must be taken to remove this invasive plant.

Great crested newts can be found in some of the ponds on the common however the presence the pygmyweed is reducing the availability of suitable native plants for newts to fold their eggs into.  If this plant is left to spread, great crested newts will be forced out of these ponds and there is some evidence that this is already happening here.

There are a number of methods of removing New Zealand pygmyweed including chemical means, hot foams or dies however they are not 100% effective and chemical treatments have been used previously without success.  The plant can re-establish from just 5mm of vegetative material so it is essential to completely eradicate it.

To do this, we will be covering the ponds and their immediate area with black polythene to completely exclude the light which will kill the plant.  Discussions with the Environment Agency have highlighted this method as the most effective and environmentally friendly option.

To protect the pond covering from livestock, people and dogs, fencing will be erected around the ponds.  A notice under section 15 of the Malvern Hills Act 1995 has been published above.

Once the black polythene has been removed, native flora with regenerate from the local seed bank and this will include plants suitable for great crested newt breeding sites.  Over time the ponds will return to a fully functioning ecosystems and important parts of the landscape of Castlemorton Common.

All the work is being carried out under protected species licence from Natural England.

This project is part funded by the European Union Regional Development Fund through the Worcestershire Natural Networks Programme. 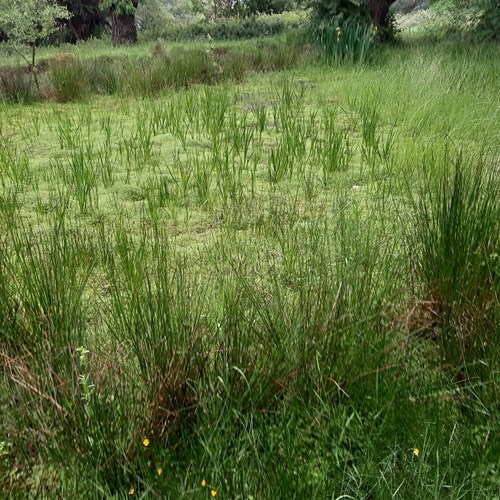