Sheep put down after an attack by dog

A sheep has died after being attacked by a dog on the Malvern Hills.

A member of the public report to the Trust that they had seen an injured sheep early on Thursday morning (10th November).  When the grazier attended it was clear that the injuries were so serious that nothing could be done and the sheep was put down.

Sadly this is the fifth sheep to be killed by dogs on the Malvern Hills since the 1st January 2022.

Beck Baker, Community and Conservation Officer said "It's so distressing to see the damage that can be done to another animal by a pet dog.  This sheep will have suffered horribly before being put down.

"We urge dog owners to always put their dogs on a lead when walking near livestock on the Malvern Hills and Commons.  If you cannot be certain that your dog will return immediately when called, whatever the circumstance, please keep your dog on a lead at all times.  If all owners did this, together we'd put an end to these horrific incidents."

Allowing your dog to worry (which includes chasing), bite or kill livestock is a criminal offence and this incident has been reported to the police.

Cattle and sheep can be found grazing the Malvern Hills and Commons all year round.  The locations of livestock are published each week in Stockwatch updates on the Trust's website, linked to on the Trust's social media and in the Malvern Gazette.

Beck added "By providing the locations of grazing livestock we can help people be prepared before they visit with their dog.  People should however be aware that much of the Hills and Commons are registered Common Land and it may be that livestock are found outside the areas listed in Stockwatch."

Livestock are an essential part of the management of the Malvern Hills and Commons. The cattle and sheep eat the bramble, scrub and young trees and this maintains the open grassland habitat.  This keeps the landscape special and benefits the geology, archaeology, wildlife found here, as well as maintaining access and views for visitors. 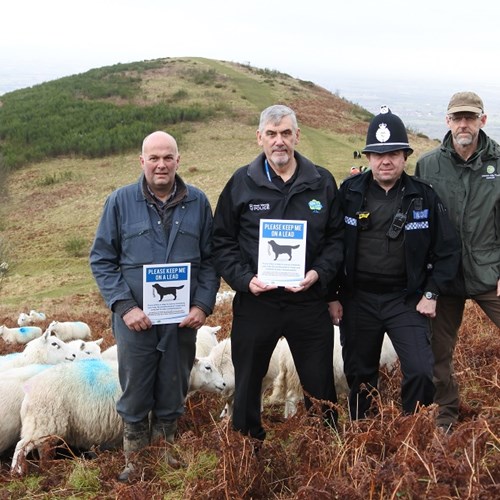