Archaeological repairs have been completed on the 2000 year old monument of British Camp.  Delicate work has been carried out to block and stabilise a large scar on the upper slopes of the hillfort and to stop further erosion of the distinctive banks and ditches.

Over time, damage by feet and bike wheels had resulted in a deep gulley which had been eroding away the amazing structure of this ancient monument.  Water run off from the top of the hill down the gulley had further increased the depth and the size of the scar, causing serious damage to distinctive shape of the Hill.

The major practical works are finished although the area remains fenced off to allow the vegetation to recover and form a protective layer on top of the loose soil.

As one of the best preserved hillforts in England and a popular spot for visitors, British Camp is designated as a Scheduled Monument which gives it national protection.  Both Natural England and Historic England have been involved in the planning of the work to this sensitive archaeology.

ALTOGETHER FOR ARCHAEOLOGY - HOW YOU CAN HELP

We’ve undertaken the practical rebuilding work, but you can help us by:

WHERE CAN I MOUNTAIN BIKE FROM BRITISH CAMP?

To protect the monument, cycling is not permitted on British Camp but there are bridleways and permissive cycle paths nearby.

There’s a map of the bridleways and permissive cycle paths on the information board in the car park.  This will help you find your way if you’re looking to explore the Malvern Hills by bike.

The best place to cycle from British Camp is northwards along a short stretch of road (Jubilee Drive) towards Black Hill where new permissive cycle paths link up with the wider bridleway network.  Once at Black Hill car park, follow the purple arrows to head onto the Hills and get you started on the right track.   There is limited cycling access south of British Camp.

The purple arrows mark the Long Mountain Bike Trail around the Malvern Hills.  A map of this 19km cycle route can be found on the British Camp notice board and can be picked up from local bike shops and Tourist Information Centres or downloaded here. 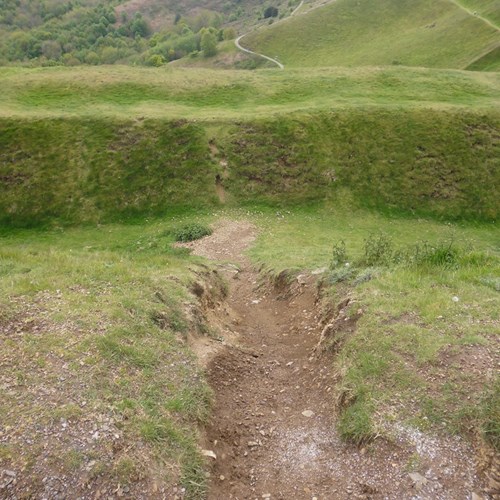